QB-5 - Adventuring in Ontario's Backcountry
summer 2017 -  500 miles - 4 days
Soon after our group's 2016 Jeep Overland trip through the North Maine Wilderness, I got to work planning a follow-up trip for the summer of 2017. We had explored New England, and while Utah was on the group's bucket list, it was a bit too far away from Boston to pull off in under a year. As such, my friend Rob and I began exploring more "local" options. After quite a bit of time with maps and even more time with scheduling, we have drew up an awesome off-pavement adventure through the Ontario/Quebec provincial divide of the Ottawa Valley Region.

​Our group included fifteen of us split between 2 Jeep Grand Cherokees, 4 Wranglers of the TJ/JK/LJ models, and a Toyota Tacoma. We met at a highway rest-stop on I-90 just outside of Boston on an overcast Thursday morning on the 27th of July and began our convoy out to western New York. We were in and out of heavy rains throughout the day as chatter filled the air waves on our CB radios. Lunch in town just over the Mass/NY state line lasted longer than we anticipated, but with full stomachs and a yearning for adventure we carried on towards our final destination, a small campsite in the tiny upstate town of Theresa, NY where we would spend the night. Settling in with a delicious steak and veggie dinner, we gathered around a campfire and listened to one of the kids play a ukelele until retiring to our respective tents for the evening.
​ 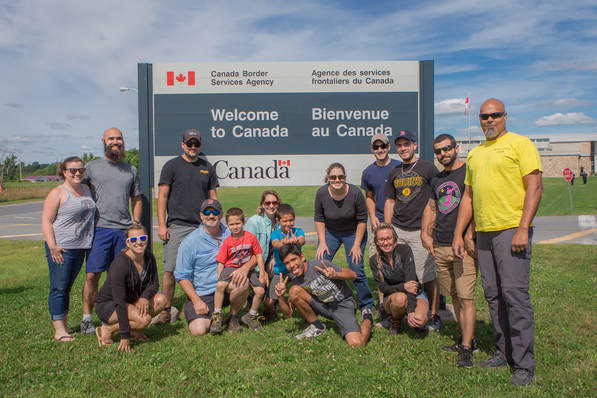 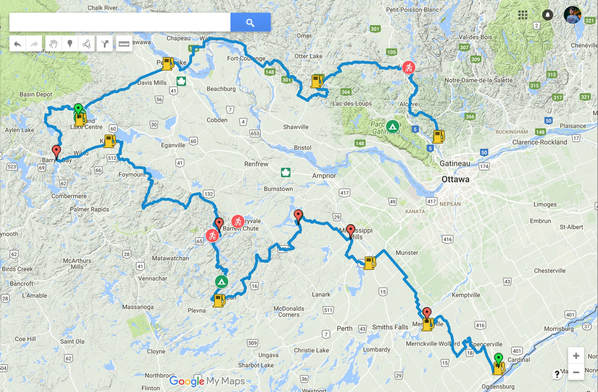 QB-5 Overland Route
Our second morning started with breakfast sandwiches cooked on the grills as we packed up our tent site and began getting ready for the hour push up quiet country roads to the Ogdensburg, NY bridge that would take us across the Hudson River to Canada. We made a quick Wal-Mart stop for last minute supplies and refueled one final time before crossing the international border, ultimately arriving at the border crossing checkpoint around 11h00. Our day was already running behind, but we were in great spirits and after a somewhat eventful passport check at the border, navigated a few more miles before turning off pavement and beginning the backcountry adventure of QB-5. We explored single-track dirt roads through the woods, crossing through rivers, and passing gorgeous and seemingly forgotten lakes. Our first night's camp was at a lakeside campground on the northern edge of the Black Donald mine. A make-your-own tacos dinner was wrapped up with a huge fire as the sun set and stars brilliantly appeared overhead.

​We woke and packed up camp before spending a little time down by the lake's docks while Rob used a saw-zall to cut off his exhaust tailpipe. The day's route started off strolling through a small lakeside town an hour and a half into our ride, then turning off the established roads in favor of the tighter, unmaintained roads that make our trips exciting. In single-file fashion our caravan rolled through the woods, suspensions continually articulating over uneven terrain, calling out to Brendan in the back to make sure he hadn’t gotten lost in our cloud of dust. We ate lunch alongside a lake, soaking up the sun and enjoying a game of frisbee before heading on. We had roughly 30 miles to cover before reaching our campground in the Bonnechere Provincial Park. The terrain was comprised mainly of rough dirt roads that likely see a lot of 4WD traffic. Some areas were a tighter squeeze through brush and fallen trees than others, but we eventually arrived at our destination, breaking up to resupply beer & hard cider supplies while some of the group stayed at our campsite to start dinner. Again we stayed up late into the night laughing and telling stories about adventures of the past, and hopes for future trips together.

Sunday's adventure was slated to be a lot of off-road driving, though the terrain slowed our pace drastically. Mid-day, while on pavement between backcountry routes, we came across a sign for the Chutes Cologne, a famous waterfall and high-adventure ropes facility that seemed to be in the middle of nowhere. As a group we voted to stop, and spent a few hours exploring the area on foot before moving back into the woods. Our day ended in Ottawa, Ontario, where we tried to get a meal together before everyone went their separate ways. By 18h00 Dani and I turned the Jeep west and began our journey across the country to Banff & Jasper National Parks in Alberta, while the rest of the group turned east and began the journey back to Boston.

Looking back, the trip as a whole was absolutely success. There were moments that were frustrating for everyone, issues with radio communications, occasional navigation hiccups, and probably a few other things I don’t remember. In the end though we all had a great time, enjoying each others company and getting out into the backwoods of a country and province I’ve never been able to explore before. I’m not sure where we’ll go next year, or what kind of trip we will go for. We’ve got a year to throw around ideas and actually plan it, and a year to talk about change we can make to have the whole adventure be even more enjoyable. At the end of the day though, the ability to get out with 15 friends and use the vehicles we’ve built for off-road travel to do such a thing and do it well, was an awesome opportunity and one that I will not take for granted. Until we’re able to hit the road again, I can’t wait to see where the year ahead takes us and find out what’s in store for next summer.​