Long Trail Thru-Hike Attempt
winter 2016  -  125 miles  - 12 days
In 2015, after a few glasses of whiskey and an immense Thanksgiving dinner, my good friend Sean "Santa" Smith and I decided that we would undertake a thru-hike of Vermont's famous Long Trail. The oldest long distance hiking trail in the United States, it spans 273 miles from the Massachusetts/Vermont state line to the Canadian border up the Green Mountain ridge. We had already hiked half of it, as the Appalachian Trail shares the same exact route for the first 104 miles, and were excited to hike and finish the trail in its entirety. To make things more interesting, we decided to attempt our thru-hike of the trail in the winter, and with a quick review of our calendars and availability the date was set for December of 2016 to begin our adventure.  As the months led up to our start date I invested a fair bit of money in rounding out my winter hiking gear, buying some of the lightest and most durable equipment available. I'd carry the Mountain Hardwear Direkt2, a tent that really seems to be a one-trick pony for the coldest, windiest, most extreme weather conditions you could possibly be camping and hiking in. By mid-November I had all the gear I needed, a pack weight I was happy with (around 24 pounds without food), and immeasurable excitement for the trip we would soon be departing for.

Celebrating my 25th birthday on Sunday, Santa and I departed on Monday morning for the western part of Massachusetts where we'd begin our hike north. My mom graciously dropped us off in Williamstown and watched us hike off into the woods, our sights set on the international border a few weeks north by foot. Our first "day" included a 3 hour hike past the state line to the first shelter on the trail. Our adventure had officially begun, and we were greeted by mother nature with sub-zero temperatures on our first night. As we rose with the sun we learned the first of many lessons the Long Trail would teach us, the fact that getting out of a warm sleeping bag when it's 5 degrees below zero is a terribly difficult thing to force yourself to do. As we continued on with our hike we learned more about the trail and each other, figuring out the rhythms of our days rather quickly. I was frustrated almost immediately to figure out that we would not be capable of moving at the 3+ mile per hour pace I maintained throughout 2,000 miles of the Appalachian Trail just two years prior. In fairness, we both absolutely knew this was going to be the case going into the hike, but I'm sure we both had high hopes that we could power through. We discussed on the third day of the trail, exhausted by lunchtime having hiked through a snowstorm over a half dozen mountains, the possibility of not making it to Canada. We decided we would push as hard as we could for as long as we could, making it as far north as possible.
Our first week on the Long Trail kicked our butts. Our slower pace was tough competition for the mileage we had hoped to attain, although we worked consistently to move forward. Our leg muscles built as we moved further north, our pace becoming more consistent in the 1.5 to 2 mile per hour range, and we were becoming more confident in our hike as a whole. We swore our way up Stratton as the first big peak of our trip, and flew down the other side at a pace that left us smiling for the rest of the night. Our first town stop was in Manchester Center, VT, where three amazing locals provided us rides to and from the trail on Christmas Eve after laundry was done and food replenished. The holiday was spent in a shelter halfway up Bromley Mountain, and the next morning we shared hot coffee with a half dozen ski patrol members at the summit the ski lift hut. It was with immense pride that we would proclaim our intentions of walking to Canada in this weather, and the statement was always met with awe (or at least judgement of sanity).

After a day and a half of unusually warm temperatures, including a few hours in the 40s - the first and last time we'd see digits above freezing on the entire trip - we were hit with some snow that left us with quite the challenge on Killington's peak. The warmer weather had made the existing snow wet and heavy as it began to melt, and with fresh powder on top we consistently found ourselves waist deep in snow ascending the 4,235' peak. It was that day that we were first warned of the blizzard approaching, as we sat in a shelter on the mountain's western face and skiers asked what our plans were for the upcoming weather. Without great cell service recently, we had no idea of what was coming. We continued down the mountain's long descent, making it to town and road-walking to a local lodge for a hot meal and a warm bed.

It was on the 29th of December, our 11th day on the trail, that we hiked out into a blizzard that promised nearly a foot and a half of snowfall in less than 24 hours. I was one hundred percent confident in our knowledge base as hikers, our gear, and our awareness and competency to make good decisions, so no part of leaving the safety of the hotel and walking into the mountains concerned me. As we made our way north of the Long Trail's split from the Appalachian Trail, we found it immediately more difficult to follow the path through the woods. Climbing up into the mountains from Killington we lost daylight much earlier than usual due to the overcast skies and heavy snowfall, causing us to slow our pace even more than normal. As darkness settled over us our headlights illuminated whiteout snow conditions and our ability to navigate was reduced to short paces forwards before stopping to try and find our path again. It was around 1800hrs that night, after half an hour of trying to retrace our footsteps and find the trail we had seemingly permanently lost, that we made the executive decision to shelter in place and wait out the storm overnight. The next day it took us 10 hours to travel 9 miles through incredibly deep snow over unforgiving terrain. After a conversation prompted by Santa's concern for his mental capacity to move forward with the hike, it was decided that the best option would be for us to call an end to our adventure. We had covered 125 miles in 12 days, a great distance given the time of year and conditions of the trail, but ahead of us still lay far more difficult terrain and our time limitations dictated a rigorous mileage schedule for us to follow in order to complete our hike to Canada.

The fact that we ended our trip early has weighed heavily on my mind since the day we got off the trail. Anyone who knows me, and even those who have read the blog and come to know me through the incredible power and reach of the internet, know that I'm not one to give up without a fight. It frustrates me that I didn't get to go down with my fists swinging, that I didn't get to push myself as hard as I could to make it as far as I could, even if I never made it to Canada. In the end the trip wasn't something I ever should have or would have continued on with alone, and I'll remember fondly the time my friend and I were able to spend in the sub-freezing mountains of Vermont. There's no doubt in my mind that it was the right decision to get off the trail when we did; we were not operating at 100%, not thinking and moving at our most efficient level as a team. The Long Trail will be there for as long as I'm alive, and I look forward to getting the opportunity to finish what I started; it's not defeat if you live to travel another day. 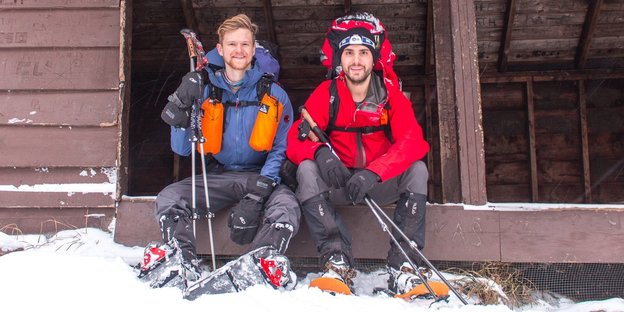